This photo now shows all that it had before and so much more. It isn’t just the addition of another person; it showcases life. Real, down to the nitty-gritty life in all it’s glory and differences. It shows dedication, commitment and choosing each other – even on the really difficult days. The days when people who have been blessed in not experiencing the blending of two families, will almost always misunderstand us. The days when I’m told I will never be his “real” mom because he has a biological mother already. The days he is told he is not my “real” son because I didn’t give him life. Those are the days we choose each other more and now we are very much mother and son. 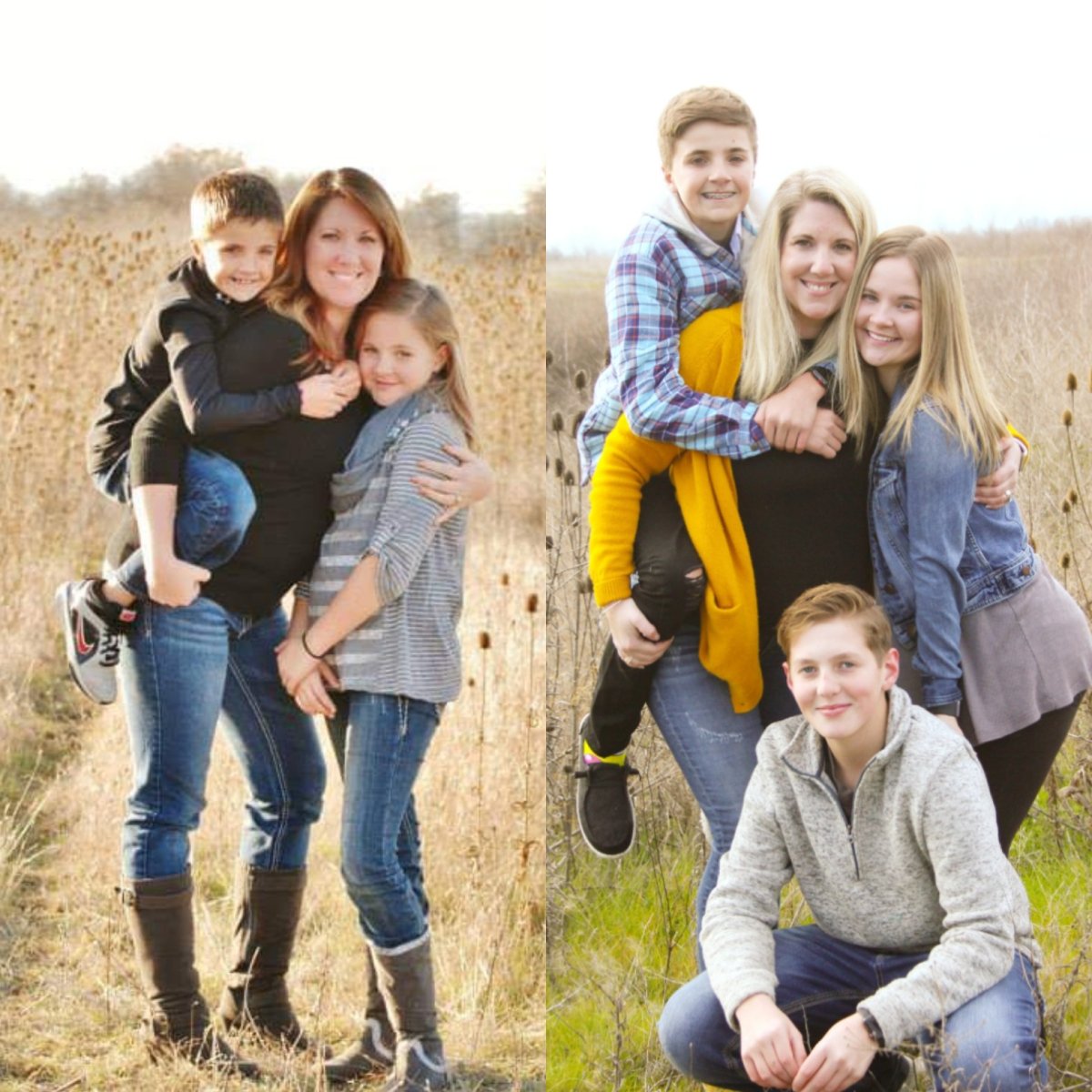 The photograph below was taken on my 34th birthday and it has been a favorite of mine for many years. When you look at this photograph you see a mother, son and daughter. When I look at it I see protection, love and strength surrounding our little family of three.

Sweetly tucked just under my wing, yet still standing on her own is my daughter Gracie. Her beauty has always taken my breath away and her independence has always tested my strength while educating me simultaneously. This girl differs from the rest. She is an original. I see a young girl who loved softball and had dreams of becoming a lawyer and attending Harvard.

On my back is my son Gage. Just look at his sweet face and how he’s proud to wrap both his arms around his momma, but is still held up by me. He loved his momma more than anything and his sissy was a close second. Baseball and basketball were life, and he had dreams of being in the MLB or NBA.

Then there is me, proudly standing on my own two feet. No matter how many times I fell down, I always got back up. I became well-versed in God’s redirection and going back to the drawing board, editing and revising my life until I became a better woman and mother. I see a woman falling in love with herself for the first time and making her children proud. This photo became my life’s mission statement a visual anthem that said together, we had everything we needed and could make it through anything.

It is crazy how much history and memories a single photo can hold. On this exact day my boyfriend was preparing a surprise birthday party for me at my home. We had started dated seven months before and he had a son from a previous marriage, Cole. Cole and Gage knew each other from school and introduced us because Cole’s dad was the boys baseball coach. I was in a stage to push everyone away and pull my children closer. I was fine with a boyfriend, but not marriage, and most definitely not another son.

His son. That is what Cole was, he was my boyfriend’s son. He was unique and unlike my children. I struggled to understand and connect with him. He wanted to be just like his dad and their bond was unlike anything I had ever witnessed between a father a son. There was no room for me. If we walked beside each other, Cole would come in between us. He liked me but he didn’t like me having any attention that could be his. It was difficult to navigate and I won’t lie and say I didn’t get frustrated, cry and want out.

After a year of dating, we moved in together. Things were still challenging, but I loved his father, so we committed to making it work. Cole desperately missed having a mother, and I wanted no part in that. If you read my post, No, you already have a mom, then you know the story already. He’d ask to call me mom, and I’d say no. Yet, I did all the things a mother would do for her child. We spent countless hours at the dining table doing homework, working with teachers, reminding him to brush his teeth, to change his underwear, doctor’s appointment’s and everyday mothering. He had everything he needed. I just left the loving part to his dad. I couldn’t bring myself to be his mom plus he had a “real” mom, and I had my “real” children too. It was us three plus them two and it didn’t equal five. It equaled three and two.

One day by the grace of God, things changed, my heart softened and became protective of him. There was a moment when I could no longer sit by and watch as Cole was let down and hurt. I realized that the person letting him down was not the only one; I was letting him down too. He had not stopped asking to call me Mom, and it was clear he needed me to say, yes. Maybe, I needed to say yes too, so I did.

From that moment Cole became my son, my real son. He didn’t become my son when his father and I eventually married three years later. Or at a point when he was more pleasing or easier to love – he became my son in the middle of messiness and a storm. He became my son the day he chose me, the day he asked me to be his mom, and the day I chose him in return. God placed us together knowing that storms make trees take deeper roots and two trees intertwined were stronger than one.

In a world where stepparents are cropping/editing out or even just leaving their stepchildren out all together, I wanted to add in mine. Luckily I have a dear friend who helped me re-create the first photo with the addition of Cole. My heart (and possibly Cole’s) needed him in this photograph that reminded me occasionally of who I am today as a woman and mother because he is just as much a part of who’ve grown into and become over the years.

This photo now shows all that it had before and so much more. It isn’t just the addition of another person; it showcases life. Real, down to the nitty-gritty life in all its glory and differences. It shows dedication, commitment and choosing each other – even on the difficult days. The days when people who have been blessed in not experiencing the blending of two families, will almost always misunderstand us. The days when I’m told I will never be his “real” mom because he has a biological mother already. The days he is told he is not my “real” son because I didn’t give him life. Those are the days we choose each other more and now we are very much mother and son.

When I look at this new picture, I still see my beautiful and independent daughter who now has made room for another brother and wants to be a Science & AG teacher instead of a lawyer. Gage is still on my back, still smaller than most and loves his momma and basketball, but now wants to be a Veterinarian. Right in the middle where he belongs is my other son, Cole. I see a handsome young man who loves with a very open, gracious and giving heart. I see someone who selflessly spent hours every day for at least a week if not longer making me a Christmas present that no other parent received. I see a boy who came into my life scared of losing his father to a woman he thought was trying to take his place when all I wanted to do was share it. And, who just wanted a normal family with a mother and father – like I did. Cole is who I needed to become a better woman and mother, and I like to think I am who he needed to help him become a better man.

Being a parent has zero to do with biology and 100% to do with love and choice. Sometimes that choice is not ours to make but Gods, and he reminds us that while it may not always be easy, it is always worth it and for our good. Three plus two now equals a family of five. A real family.

Raised in the South, St. Mary’s GA – Go Dawgs! Living in the Northwest raising three, never boring teenagers, and embarrassing them as often as possible with my favorite man in the world. My writing will take you to the trenches, to where foundation has crumbled beneath my feet and I'm too weak to stand, yet strong enough to kneel. It will make you feel as though you are sitting beside me in moments of redemption with Jesus too. My life is not a fairytale, but I still believe in them and there are moments when love can shatter any heart of stone. It's my choice to share my stories, but its Gods purpose to have me share it. It needs to be known that you can struggle, battle, fail and go through hell, yet come up and out of those trenches as a warrior with a beautiful redemption story. I do my best to write with poise and gut-busting grace so its an adventure. Being blunt as all get out, saying it exactly how it is, saves everyone time. You’ll learn to love and appreciate me, and if not – that’s cool too. I’m a “go big or go home” kind of gal and nothing I do is ever half-hearted or under thought. View all posts by Totally Jessifiable